To efficiently store and display headphones a wall-mounted headphone holder is perfect. When I recently upgraded to a nice pair of headphones I realized I need one too. I liked none that I could find online so I decided to build a DIY version myself. While we are at it why not make it look really nice… and include RGBW led animations? Follow along for this project!

The way headphones are formed (or rather the way heads are formed I guess) made the general shape pretty clear for me: a rounded top with a triangle like shape underneath.

I also knew I wanted to integrate LED lighting and combine two materials I really like: Plexiglas and wood. To allow light to shine through but still diffuse it a little I came up with the idea to stack layers of wood and Plexiglas. Wood on the outside to cover everything up on the front.

Everything but the front layer will have a round whole in the middle that will contain the LED strip as well as the controller. This is how it looks like.

The last layer, the one closest to the wall also has a channel going down ending where you usually are not able to see it. I can use that to route power into the headphone holder. In the end my design looked like this.

After finishing this design I noticed a small but really important detail I forgot: the headphone holder needs to be mounted to the wall on “invisible” mounts for the whole thing to look good.

I thought of a couple possible ways to mount it: a french cleat system, glue or rods but all of them had a lot of disadvantages. Then finally I had a better but also more complicated idea. The first 6 layers can be glued together. The last one closest to the wall will be screwed into the wall directly. Than that last layer and the others can be connected to each other by strong magnets.

The idea is to get small but strong round magnets. On one part of the headphone holder I will drill out small wholes and glue the magnets in so that they slightly stick out. On the other part similar holes are drilled but deeper so the magnets are inset. That way everything clicks together and auto aligns.

After getting some strong but small rare earth magnets and doing some tests I decided to give this idea a try. It is invisible form the outside and allows me to easily take the headphone holder off the wall if I have to change something with the lighting inside.

I started by printing out templates for the front side of each layer (they are all the same obviously) and by buying the materials I needed. I got a sheet of oak (white, 18mm) and Plexiglas (transparent, 8mm). Then I used a table saw to rip it to square that the templates would fit in.

Once I had all the squares in the rough size I needed I glued the templates onto them and started cutting them to form using a jigsaw. Because this will not be a hundred percent accurate I made sure to stay a little bit outside the intended size.

When all the cutting was done I drilled the holes into every layer excluding the first one. This was done on a drill press. Afterwards I glued together all the layers but the last one.

Then it was time for sanding. A lot of sanding actually. I needed to get all layers to the exact same size for the headphone holder to look good. So I clamped down the stack of layers, including the frontplate, and got a belt sander with 80 grid sandpaper.

Finally I slightly broke the edges with sandpaper and cleaned everything up. I also tried to get the acrylic parts to a more opaque look to diffuse the lights but that did not really work out. Maybe I could have tried sandblasting but I had no such machine available. Finally I used some oil to get everything finished.

Now it was time to add the magnets that connect the full stack of layers to the last wall-mounted one. I again printed templates and marked the exact same locations on both sides. Then I used a drill press to create holes that were slightly deeper than the magnets in one piece and some slightly shallower on the other. Then I put a drop of glue into each one and added the magnets.

Before gluing in the magnets I made sure to have them facing the right way so that they actually attract each other. Unfortunately this is where I learned that my first idea was not working.

I had two problems. The first one being that it is very hard to add the exact same amount of glue to each hole. That meant that in some places the magnets stood out further. After connecting both pieces for the first time I noticed the second problem: the magnets were stronger than the glue. Maybe I did not wait long enough for it to cure but when I disassembled the holder some of the magnets were ripped out of their holes.

I still really liked the idea, so on to the second try. Where before I had used small 5x2mm magnets I got bigger ones this time. Exactly the same idea but with the bigger holes the area for the glue to spread and hold on to the magnets was bigger and slight differences in the amount less important. Finally it worked! It is still not a hundred percent perfect as some of the holes are not perfectly aligned but it works.

The magnets are easily strong enough to hold everything together, they are invisible from the outside and I can access the electronics inside at any time. Ah yes and wall-mounting is easy: I drilled two more holes in the last layer and screwed it into the wall. Then it is simply a matter of plugin in the rest of the holder.

Part of the vision for this project was adding colored LED effect lighting. Not because I need it but because it looks awesome! I decided to try out SK6812 LED strips. They are individually controllable LEDs similar to famous WS2812B “Neopixels” but they have a separate white channel for more accurate white tones (RGBW).

I bought a strip with 60 LEDs per meter and and cut up 3 length of LEDs so that each one fits inside the whole in headphone holder. Each is formed into an outward facing ring and I (re)connected them with flexible wires. I also added a small capacitor across the power lines (1000uF) and a resistor in series (470 ohms) according to the official recommendation for Neopixels.

If you are thinking about building a similar project consider buying the hardware via my affiliate link(s). It won’t cost you more and pays for my server costs.
The NodeMCU microcontroller
The SK6812 RGBW LEDs
The DT990 Pro headphones

I was looking to not only use different colors but also play around with animations. When I started this project I first wrote my own code based on the Adafruit Neopixel library and MQTT to control the headphone holder lights. I never had the time to properly develop it past the very initial versions though.

Then just some weeks ago I stumbled upon the awesome WLED library for driving digital LEDs. It includes everything I need: MQTT and HTTP support, a web interface, color changing and animations. After flashing the software onto the NodeMCU and connecting to it via my phone I provided my Wifi credentials.

Afterwards it is reachable from any device in the same network. Configuration is quite easy: in “LED preferences” I set the count to 33 (11 per ring), enabled “LEDs are 4-channel type (RGBW)” and set the “Color order” to GRB.

In “Sync interfaces” I also enabled MQTT. Thats it. Now in the main window a new white channel is available and color changing as well as animations are just working.

Of course this can also be integrated with my smart home system. I already described how to integrate WLED into OpenHab, or pretty much any other smart home system, via MQTT in my article about my smart wardrobe. This is exactly the same process.

After already covering this headphone holder and my DIY wardrobe lights more post about my other furniture projects are coming, so stay tuned! If you do not want to miss anything subscribe to my email newsletter or follow me on twitter.

I am very glad I built this. It took a lot more time than I expected (around 20 hours overall I think) but it is definitely worth it. With the LEDs turned off the headphone holder looks nice and blends in with the wall but with the LEDs turned on it becomes a center of attention.

I have used it for about two years now and never had any problems with the LEDs, magnets or anything else. This is already the seconds pair of headphones resting on the holder and the shape has worked well for both of them.

I only wish I had been able to further sand the acrylic parts to better diffuse the light and make the whole inside not round but the same form as the outside. This would have allowed the light to spread a little more evenly. While you might be able to spot it in some of the pictures in reality it is nearly invisible. 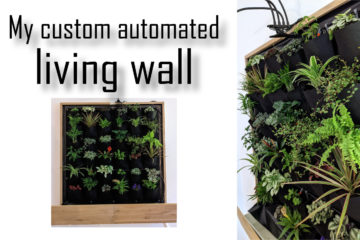 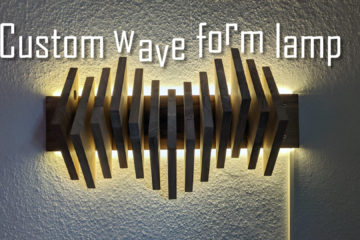 I had wood left over, I built a waveform lamp. Some projects are meticulously planned, for others it is just intuition and a good idea. I had some wooden pieces left over from my bookshelf Read more… 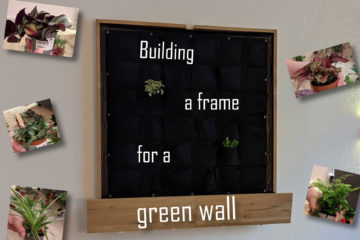 Living wall, green wall, vertical garden: there are many names for it. Putting some plants onto your walls is a recent trend that can result in beautiful rooms with better air quality. Ready made solutions Read more…